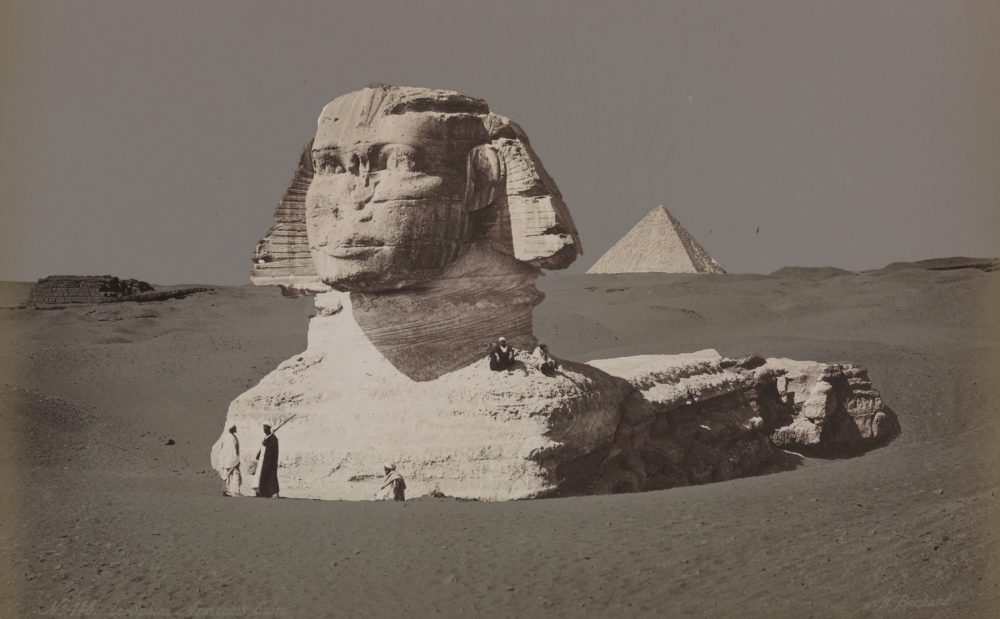 A rare image of the Great Sphinx buried beneath the sand. Shutterstock.

The Great Sphinx of Giza is one of the most enigmatic–if not the most— structures ever created on Earth. Many researchers believe we cannot rule out —entirely— that the Sphinx was built by a culture that predates the ancient Egyptian Civilization. But is this just a conspiracy, or is there more to it?

There is absolutely no information whatsoever about the purpose, origin, and age of the Sphinx. This lack of data has led many people to questions whether the massive statue was even built by the ancient Egyptians.

Here are the why’s and how’s.

Mainstream scholars have absolutely no idea who erected this majestic monument and since written history, the monument that guards the Giza plateau has been the center for countless speculations connecting it to lost civilizations and extraterrestrial beings.

We attribute the existence of the Sphinx to Khafre, the builder of the second-largest pyramid at Giza. But how much evidence backs up this theory?

At 241 feet long and 66 feet high, the Great Sphinx of Giza holds the record as the largest monolith statue on the surface of the planet. The Great Sphinx is believed to have been discovered in AD 1817, when the first modern archaeological dig, led by Giovanni Battista Caviglia managed to uncover the Sphinx’s chest for completely.

Its a formidable and unique monument. But what if there’s more to the Sphinx than what we are led to believe?

What if the Sphinx is the result of one such ancient culture that existed and flourished on the River Nile before the rise of the Ancient Egyptian Civilization?

Controversial dating of the Sphinx: An Ancient Monument around 800,000 years old?

Two Ukrainian researchers have proposed a provocative theory where they suggest that the Great Sphinx of Egypt is around 800,000 years old. A

A revolutionary theory ‘supposedly’ backed up by science.

The study was presented at the International Conference of Geoarchaeology and Archaeomineralogy held in Sofia titled: GEOLOGICAL ASPECT OF THE PROBLEM OF DATING THE GREAT EGYPTIAN SPHINX CONSTRUCTION.

The starting point of these two experts is the paradigm shift initiated by West and Schoch, a ‘debate’ intended to overcome the orthodox view of Egyptology referring to the possible remote origins of the Egyptian civilization and, on the other, physical evidence of water erosion present at the monuments of the Giza Plateau.

Apparently the entire landscape of the Giza plateau, including the Pyramids and the Sphinx, display signs of erosion. This –rather controversial— fact has led researchers to suggest that the Pyramids and SPHINX were once submerged underwater.

Dr. Robert M. Schloch was one of the first researchers to address really the theory that the structures of the plateau are much older than previously thought. In the early ’90s,  Dr. Schlock suggested that the Sphinx was thousands of years older than archaeologists believed, dating back to 5000-9000 BC, this suggestion was based on erosion pattern of water found at the monuments and the surrounding rocks.

Archaeologist Sherif El Morsi, who has worked extensively on the Giza plateau for over two decades, and his colleague Antoine Gigal discovered a controversial fossil that allegedly backs up the theory that the entire area was once submerged.

The Ancient Egyptians were splendid record keepers. In fact, they made sure to write down nearly everything so future generations could appreciate their accomplishments, and understand their history.

Strangely, there are no written texts that speak about the Sphinx. It is as if the Great Sphinx wasn’t built by the Ancient Egyptians.

Not one ancient text mentions who carved it, why, and what its purpose was.

The Great Sphinx is one of the few constructions of ancient Egypt that has no inscriptions on its surface. Not a single symbol has been found on the Sphinx.

According to some texts, ancient Egyptians referred to the Sphinx as balhib and bilhaw. Circa1500 B.C.E. it was referred to as Hor-em-akht – Horus in the Horizon, Bw-How Place of Horus and also as Ra-horakhty Ra of Two Horizons.

The ‘Inventory Stella’ – Found at Ghiza by Auguste Mariette in the 1850s, in the ruins of the Temple of Isis clearly states that Khufu restored the Sphinx. This points to the fact that the Sphinx was constructed much before Khufu and not by him as some suggest. These Stelle reads:

“Long live The King of Upper and Lower Egypt, Khufu, given life
He found the house of Isis, Mistress of the Pyramid, by the side of the hollow of Hwran (The Sphinx)
and he built his pyramid beside the temple of this goddess and he built a pyramid for the King’s daughter Henutsen beside this temple.
The place of Hwran Horemakhet is on the Southside of the House of Isis, Mistress of the pyramid
He restored the statue, all covered in painting, of the guardian of the atmosphere, who guides the winds with his gaze.
He replaced the back part of the Nemes head-dress, which was missing with gilded stone
The figure of this god, cut in stone, is solid and will last to eternity, keeping its face looking always to the East”

French Egyptologist and Director General of Excavations and Antiquities for the Egyptian government, Gaston Maspero, who surveyed the Sphinx in the 1920s asserted that:

“The Sphinx stela shows, in line thirteen, the cartouche of Khephren. I believe that to indicate an excavation carried out by that prince, following which, the almost certain proof that the Sphinx was already buried in sand by the time of Khafre and his predecessors.”