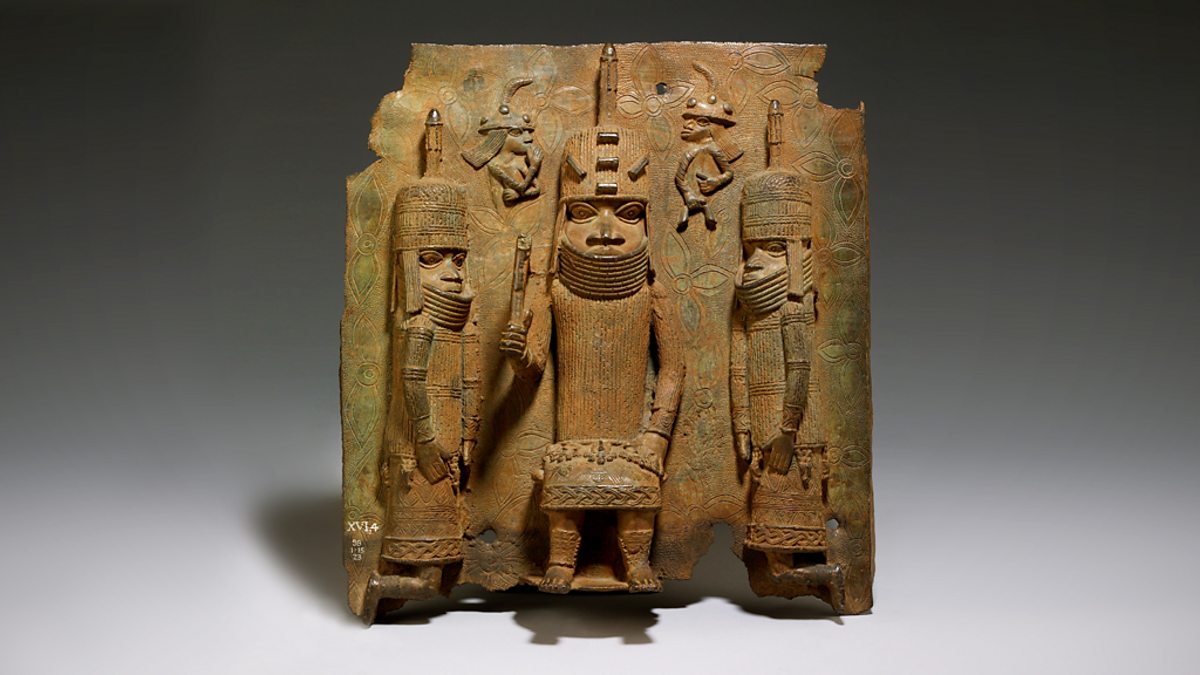 Brass plaque depicting the Oba of Benin with the Europeans.

The Benin Empire was one of the longest-lasting empires in all of West African history. It was located in modern-day Southern Nigeria and dominated the region from around 1180 to 1897. It was founded by an ethnic group called Edo while their king was called the Oba. Even today, the monarchy exists as a traditional state in Nigeria and has its own Oba.

How did it all begin?

Before the Benin Kingdom and later on the Benin Empire, there was another kingdom called Igodomigodo. It was inhabited by the same Edo people and their rulers were named Ogisos. Somewhere around the late 1100s, the kingdom was in turmoil and the Ogisos lost their power. It is said that the Edo people asked the king of the neighboring kingdom of Ife to help them survive the turbulent times.

According to the tales, the King of Ife sent his son Oranmiyan on a peace mission to help the Edo people. Later on, Oranmiyan named his son, Eweka, the first king of the newly founded kingdom of Benin. He ruled for over 60 years and laid the foundations of a long line of mighty Obas and one of the most powerful empires in the history of Western Africa. 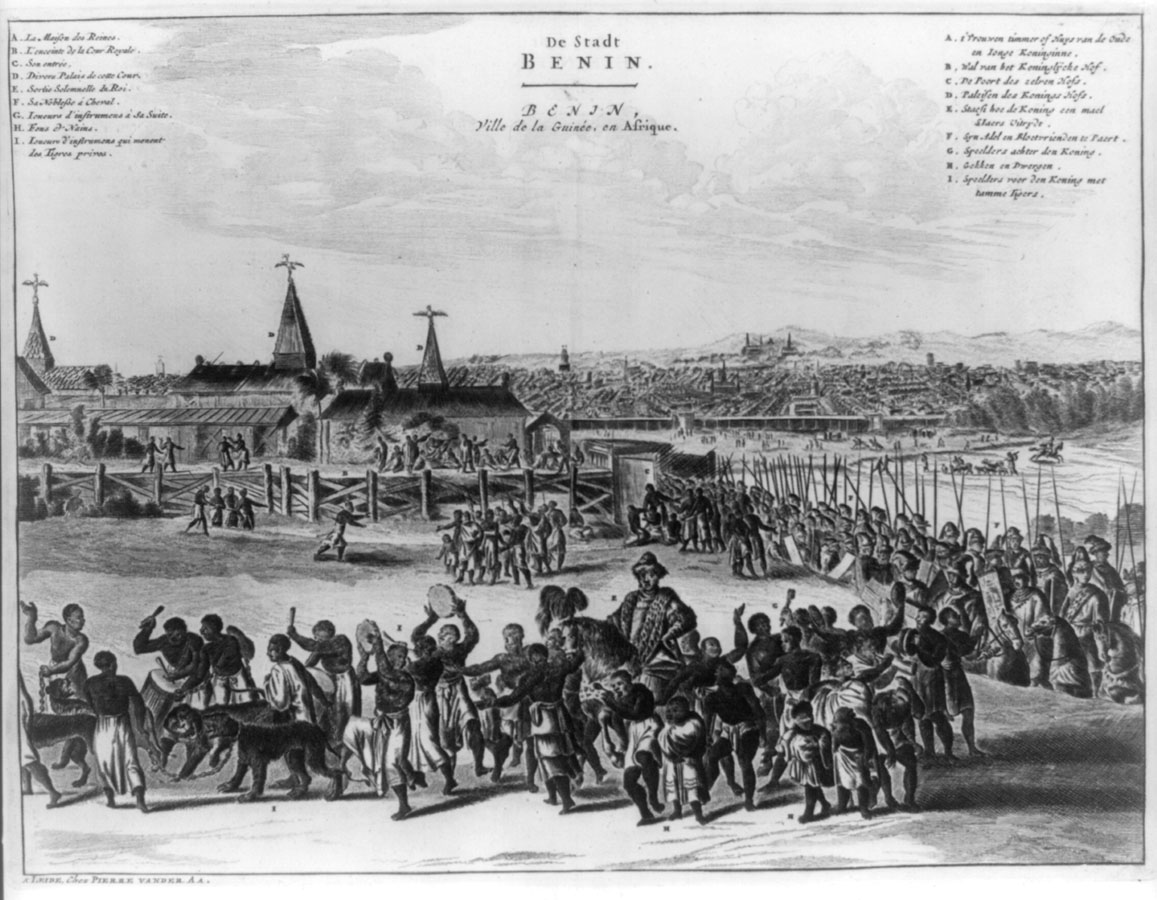 Old depiction of the capital of Benin from 1668. Source: Wikipedia

The largest expansion of the Benin Kingdom began somewhere around the mid-1400s when Ewuare became king. It is said that he was the first of five warrior kings who transformed the kingdom into an Empire. His son, Oba Ozolua, continued his conquests and is perhaps the most famous warlord in the history of Benin. Historians believe that Ozolua won more than 200 battles during his reign.

Besides the obvious territorial growth, the Benin Empire expanded its trade with the Portuguese which helped the economic growth and the further improvement of their army. The Empire reached its peak during the reign of Oba Orhogbua who expanded its territories beyond the River Niger and modern-day Ghana.

The decline of the Benin Empire began during the reign of the last of the five warrior kings – Oba Ehengbuda. He had to fight off numerous rebellions and many territories were lost.

The Architecture of the Benin Empire

The Benin Empire has always been known for its impressive and unique architecture. European travelers and traders were fascinated by their achievements all the way back in the 14th and 15th centuries. In fact, it was known as Great Benin. Based on the words of travelers, the palace was surrounded by magnificent wall structures and the inside was also divided into numerous smaller palaces of unique architecture.

Besides their apparent knowledge of architecture, the Edo people were incredible warriors. They were well aware of the art of war and the Obas invested greatly into the defense of their empire. They were so dedicated to their military progress, that they built one of the most impressive defense structures not only in Africa but the world. It is considered that the walls of Benin are considered to be the largest man-made structure in the world at the time with the alleged length of over 9000 miles.

The End of the Benin Empire

The Benin Empire was annexed by the British Empire like numerous other African kingdoms and states during the Scramble for Africa in the late 1800s. By that time, Benin was no longer powerful and its territories had shrunk due to numerous civil wars.  It had no chance against the Europeans but nevertheless, the Oba tried to oppose the British.

The end came in 1897 when the British sent a group of officials on a mission to Benin. They were supposed to sign a treaty that would grant Britain sovereignty and make Benin a British colony. As we already mentioned, the Oba did not want any contact with the British and thus, almost the entire convoy was killed.

Needless to say, the British quickly responded with force. They sent an entire military expedition which defeated the armies of Benin and took over the capital. With this came the end of one of Africa’s longest-lasting kingdoms. 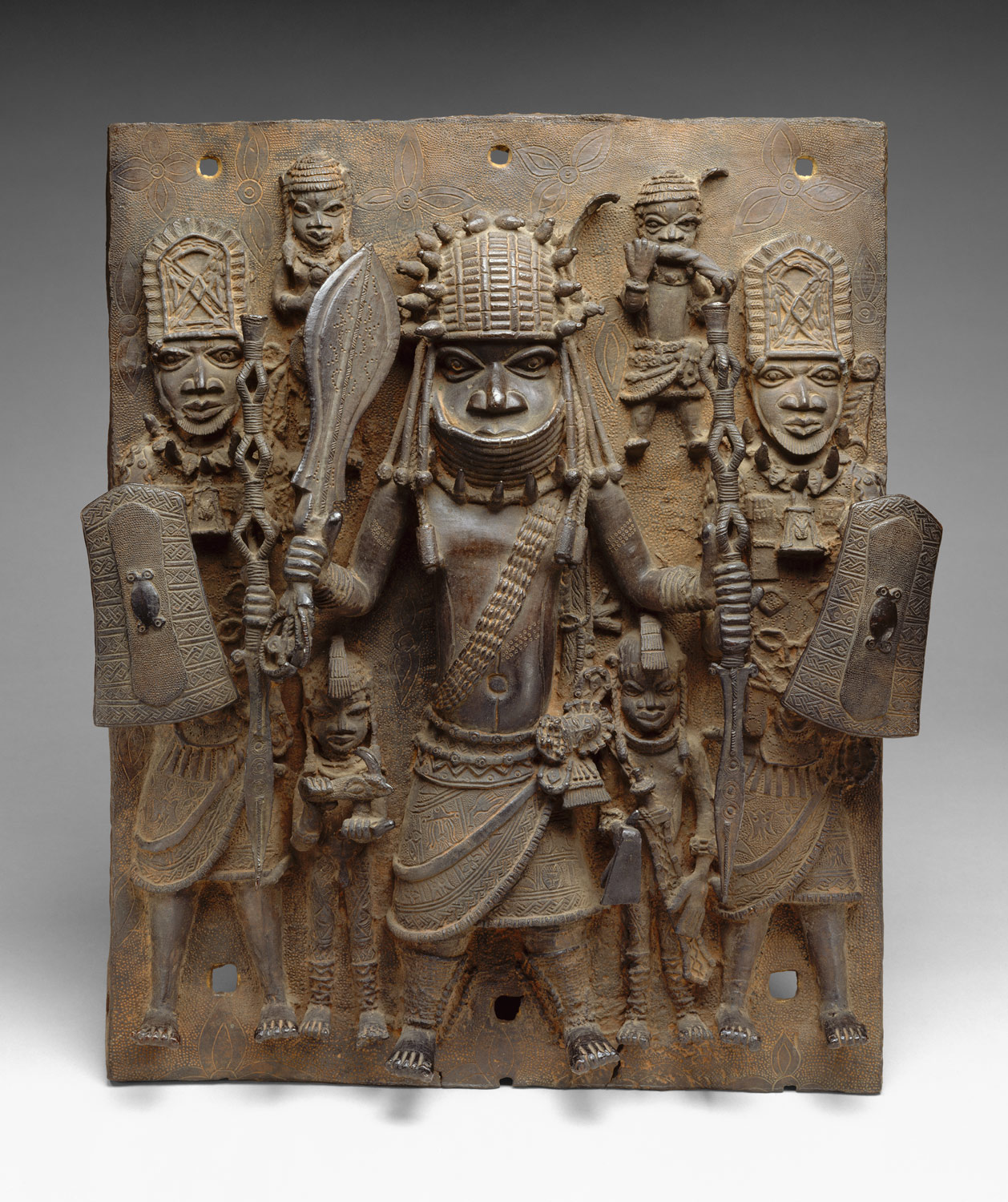 Artwork from the late Benin Empire. In the plaque, you can see the Oba and his attendants. Source: The Metropolitan Museum of Art

The victory of the British gave them the freedom to plunder the Oba’s palace and kingdom. Most of the treasures and spoils were transported to Europe. This is when the Western world got introduced to incredible sculptures and plaques produced by artists from Benin. It won’t be hard to imagine what the Europeans thought about the African cultures back in the 19th century. They believed that Africans do not have skills in artistry but the Benin treasures surely changed these perceptions.

The artists from Benin have always had one distinctive specialty – plaques. The entire palace of the Oba was decorated in cast brass or bronze plaques many of which were, of course, taken by the British. Other than the plaques, they found numerous brass sculptures of various sizes. The most widely-used materials were ivory and brass. They were known to use wood as well but wood hardly survived the climate of Africa.

In most cases, the plaques and sculptures would portray the king, traditional rituals, or even historical conflicts. There was such a variety of scenes that they gave a clear picture of the life in the Benin Empire and its history.

Most of the plaques are nowadays displayed in the largest European museums and few remain in Benin or Nigeria. We are fortunate to be able to see these ancient treasures but there is also a sad side of the reality. While European museums hold most evidence and treasures from the pre-colonial era of Africa, unfortunately, most contemporary African nations have been stripped down from their rich history.